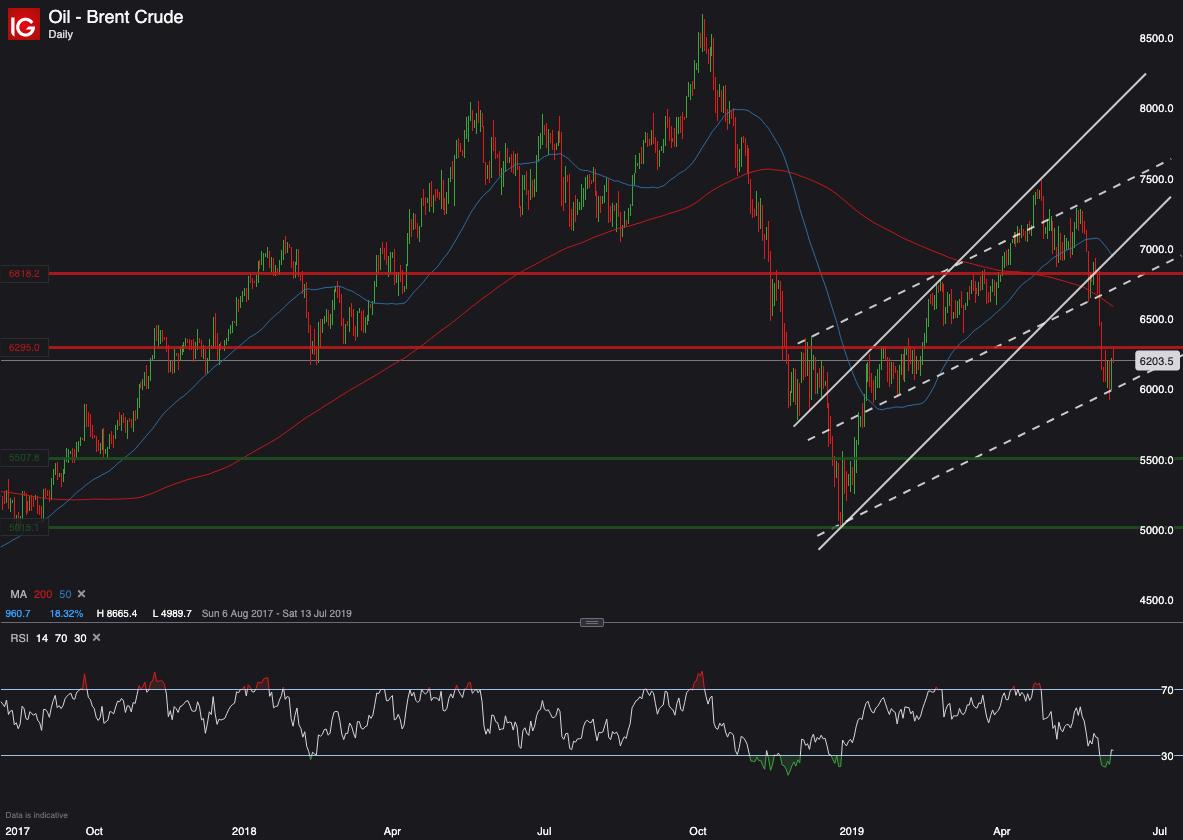 The oil price has been smashed down once again. Brent crude, which was sitting at recent highs of $75 a barrel less than 6 weeks ago, tumbled below $60 this week. At the time of writing its bounced strongly almost reaching $63, but it’s too early for bulls to get excited just yet. Last year’s mammoth price drop in Brent from $86 down to $50 will still be fresh in the minds of many, and during that slide, there was a period of recovery around today’s levels which subsequently proved to be temporary.

Factors surrounding the oil price are incredibly complex at the moment and It appears there’s a lot of smoke and mirrors going on regarding the true fundamentals as different parties fight it out with opposing rhetoric. Production is lower from a number of key producers, US sanctions on Iran, the crisis in Venezuela, and the war in Libya have all curtailed production and OPEC+ have shown they are prepared to restrain production to support oil prices. The US has continued to up its production hitting record levels of 12 million barrels per day and President Trump has made it abundantly clear what he is trying to achieve – a low oil price and strong dollar.

Macro conditions are a cause for concern too.  The last oil pullback was very much in sync with the market correction (or the start of a bear market) as you would expect and global markets have had another recent wobble triggered by the sudden escalation of the US-China trade war. Add in poor growth figures and fear over a recession everyone is ultimately waiting for and you have the perfect mix for volatility.

A look at the price chart shows Brent found solace around two regions of consolidation formed during the last oil price drop and subsequent ‘V’ shaped recovery. Today the price has hit its head on resistance at $63. A convincing move and close above this level could herald a continued recovery, with the next main target area around $68. Failure will likely summons retest of $59, which if broken opens up a window to $55. Below that is the previous low of $50 hit at the end of last year. The diagonal lines on the chart are there for context, and have proven to be previous support and resistance – they may well play a role when price next intersects them. The Relative Strength Index (RSI) shows oil is oversold as you would expect, but as last year’s price plummet shows, this could very well return into the very oversold territory a number of times.

On Wednesday, the US Energy Information Administration’s (EIA) reported quite a large build across the board including products in its crude inventory release. With refinery maintenance season behind us, you would expect draws on inventory to return soon. The chart below shows that we’re entering a period which typically sees a reduction in US crude storage, but it’s very difficult to get a precise picture of what is really going on as figures can easily misrepresent the true situation. Of course, the EIA figures don’t represent the state of affairs worldwide as they only include US inventories.

Wednesdays inventory build coincided with the recent low in oil prices, but the market has recovered with some vigor. Perhaps keep one eye on next week’s EIA figures for clues on whether oil is likely to continue its climb, and the other on the US markets as a whole. They’re not out of the woods yet.