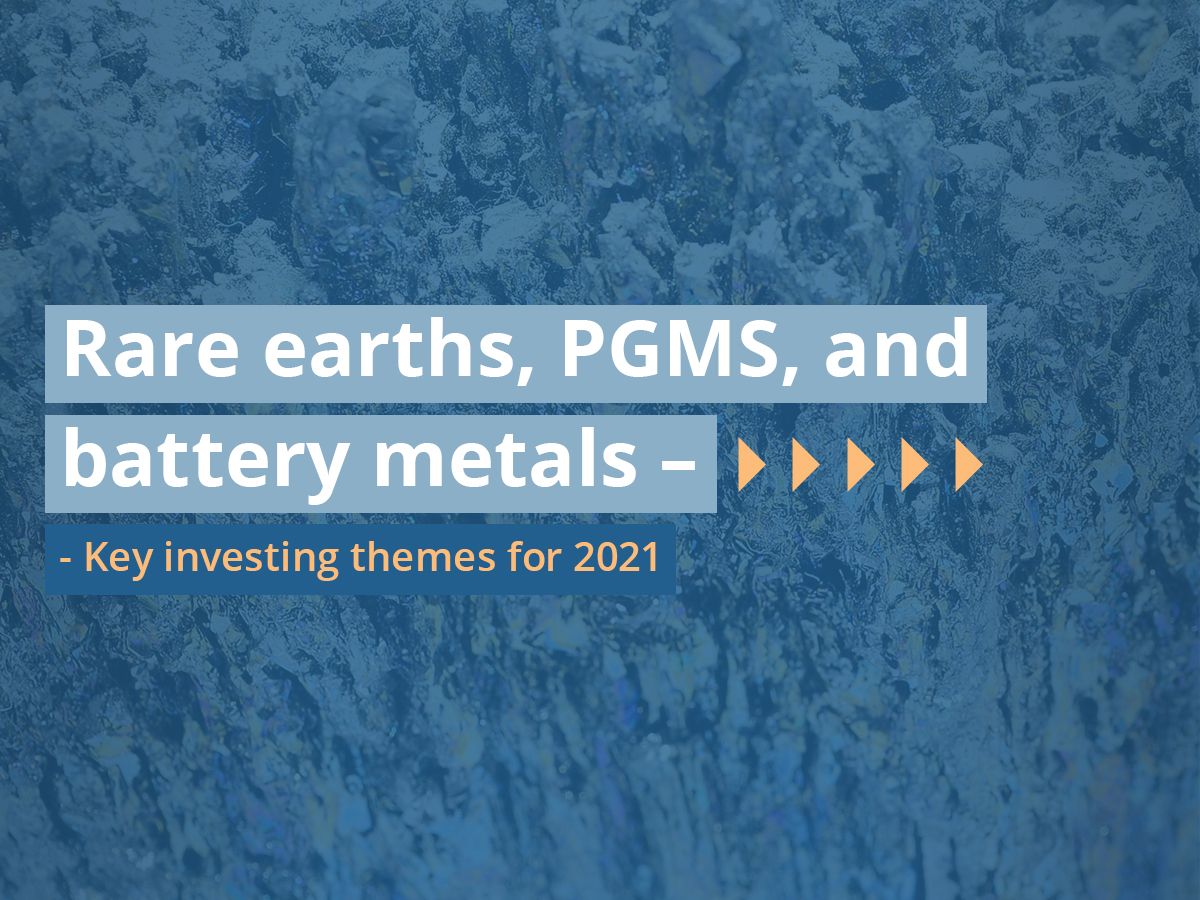 It was hedge fund legend Ray Dalio who said: “He who lives by the crystal ball will eat shattered glass.” But peer into the dim and distant future we must. And looking ahead I foresee a massive increase in the supply requirement for battery metals and rare earth elements (REEs).

One part of this dash for metals is the electric vehicle revolution, which is well underway. The stonking rise of Tesla (NASDAQ:TSLA), and the likes of rival Chinese producer NIO (NYSE:NIO), should be enough to convince you of that fact.

We know that the UK now has less than nine years before it has to stop selling all new petrol and diesel vehicles.

If you needed any more persuasion, we’ve just heard that Norway has surpassed a massive milestone. Battery-powered electric vehicles now make up over half — 54% in fact — of the country’s car market share. This is a global first, but it certainly won’t be the last.

How rare are REEs?

Investment bank UBS says the demand for electric vehicles could trigger a huge increase in rare earth element prices in the coming years.

Neodymium (Nd) and praseodyminum (Pr), two key metals traded together as NdPr “could double from $50 per kg to $100 per kg by 2024”, say the bank’s commodity analysts.

“[This is] to meet rare earth demand in EVs, which require about five times as much rare earth material as vehicles with a combustion engine.”

Again, car makers need long-life magnets made from neodymium and praseodymium in their increasing EV construction.

There are other macro factors at work. China is the largest source of rare earth elements and has a near-monopoly control of the industry. But in August 2018 the US administration passed the John S. McCain National Defense Authorization Act into law. This attempts to reduce the American reliance on foreign-sourced critical minerals. Specifcally, it bans the purchase of rare earth magnets from prohibited countries, including China. So there is a huge opportunity for any UK producer to make massive gains by selling into the American market.

As rare as the metals themselves are companies who are searching for these sought-after commodities.

One of them is Power Metal Resources (LSE:POW). The AIM-listed explorer has seen a game-changing share price surge in the last 12 months, all based on potential alone. If it is even moderately successful in discovering a source of NdPr, it’s current single-digit share price will be a long-forgotten memory. I’d put some pretty massive upside on today’s 3p price. It’s hard to say how much, precisely, but it’s a lot. I’m also particularly encouraged by the fact that CEO Paul Johnson has a significant personal stake in the company.

One key point to note first of all is that Botswana is a stable and secure jurisdiction for PGM, nickel and copper mining, retains a good human rights record — as opposed to the likes of the DRC — has well-developed infrastructure, minimal corruption and remains one of the fastest growing economies in the world.

POW reported in January that the first stage of its orientation work at Ditau was now complete, focused on the first of 10 potential magnetic anomalies called I10. Miningmaven.com has a good in-depth investigation of the update here.

POW has two very large licenses covering an area of 1386km2. Its focus here is on so-called ‘ring structures’ that are thought to host carbonatite rocks. These are the principal underground source of rare earth elements.

An independent assessment of the geology at Ditau from April 2020 confirmed the presence of 10 key features which are also present in world-class PGM deposits at Norilsk in Siberia, the Thomson Nickel Belt in Canada and Jinchuan in China.

If POW finds even a fraction of what it thinks are world-class deposits to match Norilsk, this could be a total transformation for the £30 million market cap firm. Really. 10x from here would just be the start.

Assay results and processed geophysics from I10 are expected by early February 2021, and will shape the survey plans for the remaining nine ring structures. Further planned work at Ditau in Q1 and Q2 2021 includes extensive soil sampling, with the first low-cost exploratory drill campaign coming some time in Q3 2021.

We’ve not even considered the potential in Power Metal Resources’ gold developments in Australia — another de-risked JV with Red Rock Resources with the gold price now ready to breach $2000/oz — and already I see POW as a solid long-term bid.

One shorter-term play I’m focused on at the moment is PGM producer Sylvania Platinum (LSE:SLP). PGMs like platinum and palladium are key for fabricating catalytic converters to reduce exhaust emissions in traditional cars and hybrid electric vehicles. So while the share of EVs is expected to rise to 10% of all new car sales by 2025, and 28% by 2030 — that’s according to the latest Bloomberg New Energy Finance report — there will still be high demand for PGMs.

Rhodium is the most effective catalytic metal to cut nitrogen oxide emissions and it too remains a critical component in traditional petrol and diesel-powered cars. Demand growth is expected to remain robust over the next 10 years.

So the fact that Sylvania Platinum is focused in the main on platinum, palladium and rhodium, (and to a lesser extent iridium and ruthenium) makes this a solid choice for me.

I bought into Sylvania Platinum in June 2020 at around 47p and I’m up about 91% on my investment since then. I’ve got no intention of selling just yet. That’s because I believe the project economics continue to stack up even at this elevated level. A forward price to earnings ratio of just 5.5 makes SLP shares super cheap, still, even taking into account expected double-digit forward EPS growth  and I’m adding to my holdings all the time.

Brokers and analysts Liberum Capital have a short-term price target of 115p on Sylvania Platinum, and longer-term forecasts approaching 190p. I’d agree that there is at least another 50% upside to be had from Sylvania Platinum, especially taking into account future development plans for two open-cast pits at Northern Limb, just to the north of its seven retreatment processing plants.

Its Lannex mill is now in operation having been commissioned in August 2020, offering improved efficiency and profitability from SLP’s current feed sources, while its Mooinooi chrome processing modifications, which are designed to improve PGM grades and output are expected to be commissioned by the end of Q3 2021.

The best thing about Sylvania Platinum for me is that it is a very low-cost producer. It focuses on extracting PGMs from chrome dumps and tailings, rather than spending vast amounts on drilling new holes in the ground. That’s one of the reasons why SLP now has £60 million in cash on its balance sheet and crucially, no debt.

Profitability-wise this is a stunner, too. Operating margins increased to 47% (!) in FY 2019 results, return on capital sits in the mid 30% and return on equity, so I’m confident Sylvania Platinum is using its cash wisely.

Seeing profits and EPS both double between 2019 and 2020 makes this relatively unknown AIM stock one of my clearest no-brainer buys for 2021.  A quick look at the company’s FY 2020 financial performance shows year on year net revenue growth of 62%, too.

There are also plans for a special windfall dividend in the works this year, based on soaring PGM basket prices. The figures haven’t been finalised to my knowledge, but I’d expect something in the region of 14p to 18p per share.

The play I’ll consider today is Canadian firm Global Energy Metals (TSXV:GEMC). December saw GEMC break a two-year high to hit a $0.35 share price. It has retraced a little, sitting in the high 20’s, so I see a lot of value in GEMC right now.

GEMC holds 100% of the Millennium cobalt project, along with two neighbouring exploration stage assets at Mount Isa in Australia. Then there’s also its 85% interest in Lovelock and Treasure Box in Nevada, two potential cobalt goldmines. Smith made a canny move in my opinion by selling his 70% stake in Werner Lake in Ontario on attractive terms, including taking an 11% stake in buyer CBLT (TSXV: CBLT) worth $250,000, and a clause that gives GEMC a $500,000 payout if and when the past-producing mine goes into commercial production.

CEO Mitchell Smith is a switched-on fellow and has taken GEMC into new territory by putting a portion of the company’s cash into a series of battery metals investments worldwide.

Beyond GEMC’s mining plays, it might well be Smith’s investment thesis that pushes GEMC the furthest, fastest. A well-diversified global portfolio of growth-stage battery mineral assets — whether that’s in cobalt, lithium or PGMs — is certainly key to the share price growth here, and if Smith has less need for hefty mineral extraction expenditure that will be a boon to GEMC’s market cap.