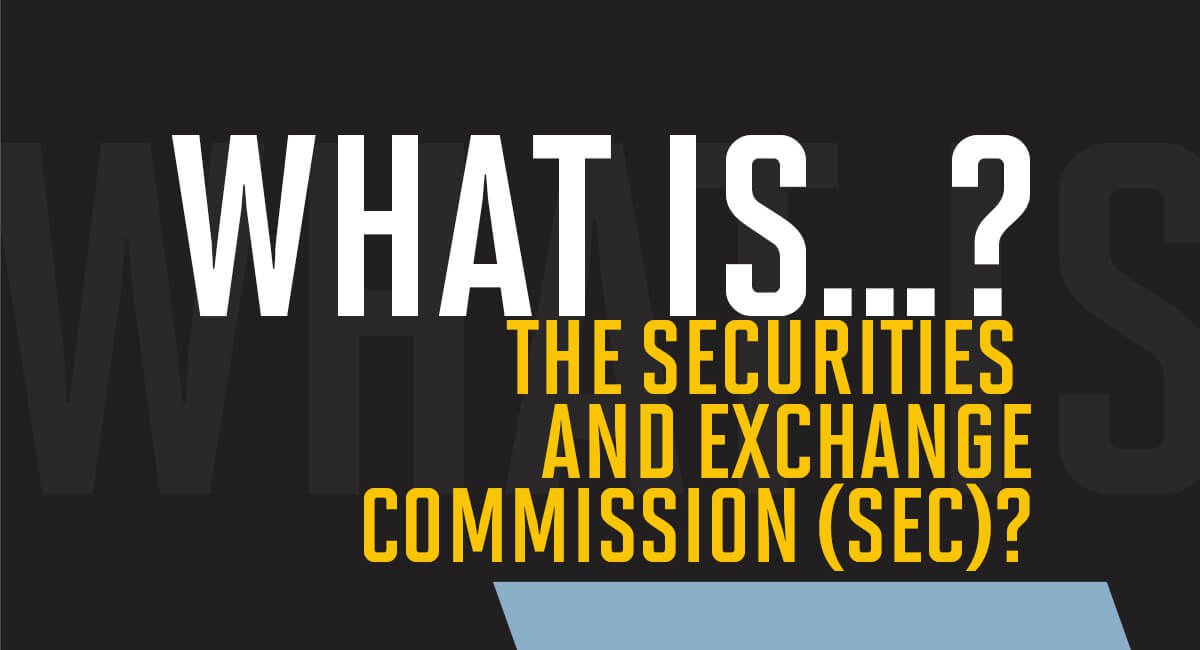 The SEC is the United States Securities and Exchange Commission. It is an independent agency run by the federal government to regulate the US capital markets.

This agency protects investors from fraud and manipulation and its purpose is to ensure the securities markets are run in a fair and orderly manner. The SEC also provides a structured way for businesses to form a public company and raise capital.

It encourages a transparent system to ensure companies are publicly honest in disclosing their business information. It also runs an approval process for bookrunners – those underwriters issuing new equity, debt, or securities instruments, in a further bid to protect investors.

Any formal securities cannot be sold to investors online, through the postal service, or via interstate commerce, without first registering with the SEC.

Did you know? The SEC was founded in 1934, after the 1929 stock market crash that caused the Great Depression. The SEC is the first federally created regulator overseeing the US securities markets.

How the SEC works

The SEC has legal oversight of all organizations, businesses, and individuals operating in the capital markets.

Foremost it encourages full disclosure and the transparent sharing of market information.

Over the years, the SEC has formed a framework of rules and regulations for individuals, companies, and organizations to follow. This includes requiring companies to issue a variety of SEC forms to meet SEC disclosure policy and obligations.

These SEC filings include registration statements, periodic financial reports, and regulatory updates. The forms are issued with a standardized format under headings such as S-1, 8-K, S-4, 11-K, 10-K, and 10-Q.

Each of these forms helps investors make informed decisions before buying or selling company shares.

The forms can be viewed and searched at the EDGAR database on the SEC’s website.

The corporate structure of the SEC

Headquartered in Washington DC, the SEC also holds 11 regional offices across the US.

The SEC management structure includes a President who appoints five commissioners to the top. One of these is also the chairperson.

The SEC’s charter stipulates non-partisanship. So, legally, a maximum of three of the commissioners can be from the same political party.

A commissioner serves a five-year term, which may be extended up to 18-months to ensure time to find a replacement and smooth handover.

Their appointments are staggered so that only one term ends each year on June 5.

Gary Gensler, a Democrat, is the current SEC chairperson. His term began on April 17, 2021.

Did you know? There are five SEC divisions, and from these stem 24 sub-offices. The five divisions are: Trading and Markets; Corporate Finance; Investment Management; Economic and Risk Analysis & Enforcement.

Each division is designed to help facilitate the many laws in place surrounding safe investing practices. They also coordinate regulation across the various echelons of government.

The Division of Trading and Markets ensures a standardized system makes for fair and efficient markets.

The Division of Corporate Finance keeps investors supplied with the relevant information relating to a company’s fundamental financial prospects and stock price. This helps the investor make informed investment decisions.

Created in 2009, the Division of Economic and Risk Analysis integrates financial economics and detailed data analytics into the core objective of the SEC. It covers the full spectrum of SEC pursuits, from policy and rule-making to enforcement and examination.

The SEC is a legal authority

The rules enforced by the SEC help protect those involved against fraud by ensuring a fair and level playing field.

Therefore, it has the legal authority to bring civil lawsuits against any entity breaking the law concerning securities.

The SEC also collaborates with the US Justice Department in criminal cases.

Financial Industry Regulatory Authority (FINRA) and the New York Stock Exchange are examples of self-regulatory organizations within the securities industry. The SEC is a backup to these authorities operating at the first level of appeal.

The SEC also runs a Whistleblower program with a rewards scheme. This incentivizes people to share original information that leads to successful law enforcement actions with monetary sanctions above $1 million. The rewards run between 10% and 30% of the total sanction proceeds, proving a very effective means of securities law enforcement.

A short history of the SEC

The Wall Street Crash of 1929 is an infamous event that marked the beginning of the Great Depression.

The crash began in September and continued through to mid-November, but its most significant share sell-offs took place on Black Thursday, October 24, 1929, and Black Tuesday, October 29, 1929.

Before the crash, Americans had enjoyed a post-war decade of wealth and prosperity, a time that’s often referred to as the “Roaring Twenties”.

Over-reaching speculation and optimism contributed to the buoyant market, which had its foundations crumble in that fateful crash.

Many companies folded, and securities became worthless. A lack of regulation had encouraged speculative behavior and trust in questionable activities—unfortunately, this destroyed public faith in the securities markets.

Restoring faith in the capital markets

Foremost, the SEC required companies to make truthful statements about their businesses. It also insisted that brokers, dealers, and exchanges operated with integrity to restore public faith and protect investors.

Since then, Congress has implemented several more laws to assist the SEC in its mission.

Following the housing market crash and the Great Recession of 2008, the SEC had a major job on its hands, re-instilling confidence and prosecuting the financial institutions to blame for the crisis.

In the aftermath, it charged 204 entities, retrieving nearly $4 billion.

Nevertheless, consumer confidence is not yet fully restored, and faith in the SEC is still being tested.

Major entities fined by the SEC include some of the world’s top money managers.

Goldman Sachs paid the SEC $550 million after the 2008 market crash. This was the largest ever penalty for a Wall Street firm.

Did you know? The largest fine ever paid was $750 million by telecommunications giant WorldCom after its bankruptcy in 2002. WorldCom was exposed as a monumental fraud, even overshadowing those of Enron and Tyco.

In recent years, the rise of consumer trading apps such as Robinhood has transformed the retail investing space. And in conjunction with cryptocurrency trading, this accelerated further in the Covid-19 pandemic lockdowns of 2020.

Celebrity and influencer marketing brought a flood of interest to the capital markets and little-known stocks. And a severe lack of regulation caused hype and speculation to run riot, culminating in the GameStop short squeeze of January 2021.

Over the past decade, the SEC has repeatedly been criticized for its handling of the 2008 crisis and for not being forceful enough in prosecuting those responsible.

In recent years Tesla CEO Elon Musk has made a mockery of the SEC, and the two remain at loggerheads.

Musk continues to taunt the agency even after settling fraud claims publicly. He paid $20 million to settle a dispute in which he allegedly committed fraud after tweeting about a potential buyout of Tesla.

Since then, he repeatedly promotes suspect cryptocurrencies, further fuelling distrust of the authority.

Advantages of the SEC

Disadvantages of the SEC

The SEC has lost public confidence after major scandals rocked the securities markets.

The Great Recession caused by the housing bubble of 2008 devastated communities and destroyed lives. And many believe the SEC has not gone far enough in investigating or punishing those to blame.

In recent years the Wild-West nature of retail investor trading has further questioned the SEC’s strength at protecting investors.

Perhaps too much bureaucracy and red-tape make it difficult to adequately enforce regulatory structure in a technologically advanced landscape.

The arrival of cryptocurrencies, meme stocks, fractional trading, an increase in trading on margin, and many more modern ways of investing has opened the floodgates to naïve and inexperienced investors.

US Securities and Exchange Commission | what is..?