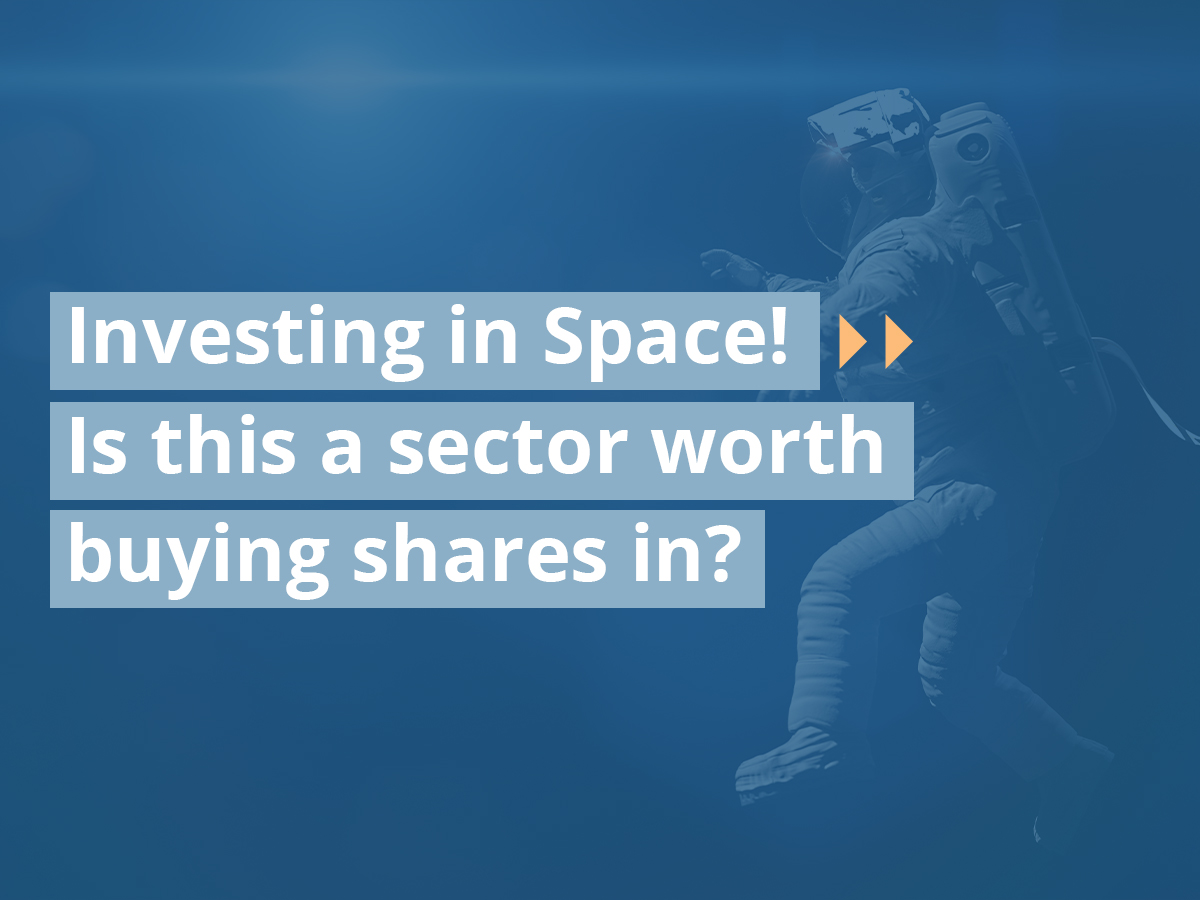 Space exploration and infrastructure projects are getting noticed and investors are circling. With buzz around the sector mounting and governments on board with exploration plans, it appears to be an early stage sector with serious potential to grow in the coming years.

It’s not an industry without risk, there are many dangers to consider and it’s an endless money pit of research and development. Multi-million-dollar rockets literally crash and burn, but progress has only just begun.

Keeping up with the Billionaires

Space exploration has been an intriguing sector of engineering since the race to the moon in the 1950s and 60s. The Space Race between the US and former Soviet Union was heightened at this time. In 1958 NASA was created and the next frontier of US space exploration began. But in recent years it’s become a competition between planet earth’s Billionaires.

The Blue Origin-led HLS National Team is completing 25 tech demos toward returning to the Moon w/@NASA, and our proposal is in. Let’s keep going so America can go back to the Moon to stay. Here’s a peek at our work – more details: https://t.co/nMACzv5DhI pic.twitter.com/oFjqSAgQZD

Two years later, Elon Musk, of Tesla Inc (NASDAQ: TSLA) fame, founded SpaceX, which is a privately owned competitor of Blue Origin. This is currently the shining star of the space show and recently completed a $2.1 billion fundraise, increasing its valuation to around $44 billion.

And SpaceX has had a notable year. It has made successful progress with its Crew Dragon astronaut capsule, which took three Americans and one Japanese astronaut on a NASA mission to the International Space Station. Its Starlink satellite internet service, which is currently being beta tested, will eventually become an interconnected internet network with thousands of satellites, designed to deliver high-speed internet to anywhere on the planet.

Last week it completed the first major flight test of its next-generation Starship rocket, which spectacularly crash landed, but only after a successful test.

Finally, on December 13, SpaceX completed its 25th launch of the year. It launched its powerful SXM-7 next-generation radio satellite into orbit on a Falcon 9 first stage rocket booster. This was the seventh launch and landing for the Falcon 9 and was deemed a success.

Feeling inspired by the wonder of human spaceflight? Experience space for yourself by taking One Small Step towards securing a seat on a @VirginGalactic flight to space here: https://t.co/o90oiXO7Cn pic.twitter.com/K8PtLiy7RQ

Virgin Galactic had to abort its landmark test flight last week within a minute of launch. This was disappointing as it hopes to be running space tourism flights within the next year and has a waiting list of over 600 customers lined up.

Thread: our CEO, Michael Colglazier, on today’s flight test. Today’s flight landed beautifully, with pilots, planes, and spaceship safe, secure, and in excellent shape — the foundation of every successful mission! Our flight today did not reach space as we had been planning. pic.twitter.com/pqfUAtp6UH

Each of these men exudes boyish excitement at the prospect of human space travel. Their enthusiasm and promotion of the mission has brought scrutiny to the sector and investor interest. Meanwhile, Hollywood’s many Sci-Fi movies and TV shows have glamourized the setting.

While Bezos kept things fairly secretive at Blue Origin to begin with, in recent years he’s been more forthcoming about his plans. He’s also committed to extracting a billion dollars a year from Amazon stock to help finance Blue Origin’s R&D efforts.

Musk has made no secret of his passion for space exploration. He’s determined to colonise Mars (he’s set an ambitious timeline of 4 to 6 years!) and is regularly launching rockets with public fanfare. SpaceX also flies rockets for satellite companies, the US Air Force and NASA.

The hype and excitement surrounding possible human space travel has been personified by these charismatic individuals, but advancements in technology, 5G in particular, is making space exploration more workable. Space infrastructure projects are gathering momentum, and investor interest is rising.

Investing in space technologies of the future

It’s not just space travel that’s attracting investment. Space technologies have become central to our day-to-day lives. Innovation in technology is rapidly evolving, offering increasing opportunities to improve human lives. Protecting the environment can be better achieved by increasing our use of satellites. The race between continents continues too. While the US is home to these publicly listed space companies, China and the UK are also competing in space technology R&D.

Since 2008, interest has escalated, and the world’s space sector has grown over 42%. During this time, the UK sector has grown even faster by more than 91%. The British government is ramping up investment, and it seems this growth may accelerate even faster in the coming years.

Earlier this month, the UK government awarded £7 million in funding to 21 UK organisations. This will boost efforts to put the UK at the forefront of the latest space innovation.

The space projects being invested in aim to achieve a variety of things. Edinburgh University has a project improving lasers to map the Earth’s surface using smaller satellites. And another developing small-scale systems to detect changes in land use that can help fight climate change. Others are working on emerging quantum technologies and artificial intelligence. There are also plans for British spaceports, starting with one in Scotland.

Morgan Stanley’s annual space summit was attended, virtually,  this month by hundreds of investors and observers. The event showcased 20 space companies including:

SpaceX was invited but did not attend. Being the lead act in the industry, it possibly didn’t want to steal the show.

Special purpose acquisition companies (SPACS) have become commonplace this year as a great way to get a private company listed quickly and without fuss. An alternative to an old-style IPO, it gives retail investors a chance to invest in a private equity type transaction.

Chamath Palihapitiya is the undisputed king of SPACs and the reason for Virgin Galactic’s successful public listing via this route.

Palihapitiya is a venture capitalist and founder of Social Capital, through which he has been involved in countless SPAC arrangements. His SPAC Social Capital Hedosophia (SCH) merged with Virgin Galactic in October 2019. SCH invested $674 million in the space tourism company, and Palihapitiya invested a further $100 million of his personal funds. This resulted in him acquiring 49% of the company at a valuation of $1.5 billion. Virgin Galactic aims to launch 400 flights annually per spaceport. This could bring in up to $1 billion a year from each spaceport.

The Virgin Galactic share price is up 172% since its IPO debut. The interim has been extremely volatile and remains down 17% from its February high.

Momentus is another space company planning to IPO via a SPAC early next year, valued around $1.2 billion. The space transportation company will float on the Nasdaq with the ticker MNTS, through Stable Road Acquisition Corp (NASDAQ: SRAC).

In a world of extreme opulence, high-class exclusivity is thriving. At $250,000 to $400,000 for a 90-minute space flight, this is firmly the wealth category where human space travel lies. Chamath Palihapitiya recognises that, and in a world of possibilities, he wants to be one of the first to board the Rocket Ship ride of a lifetime.

While investment opportunities abound, the sector is still relatively new, and growth could be slow. There are also many hurdles to cross and dangers to consider. Britain’s RAF chief has warned that Russia and China are building anti-satellite weaponry, while the US and India have previously shot down satellites in space. So, the capability for space wars is building and something companies need to be aware of. Meanwhile, there are plenty of interesting companies to keep an eye on and exciting rocket launches to watch.