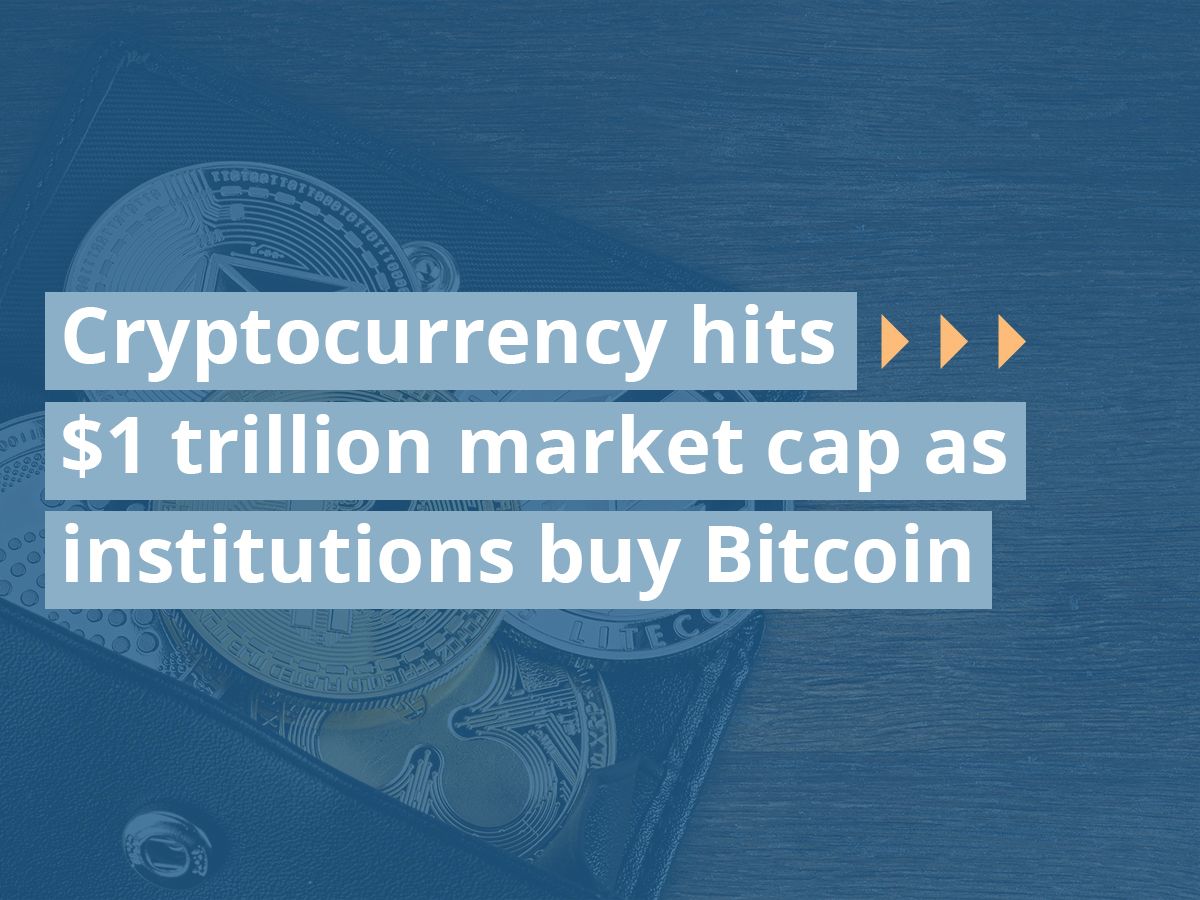 Events in Washington have dominated the headlines this week as pundits ponder the long term significance of Wednesday’s riot at the Capitol. But while all eyes were on the intruders in the Senate Chamber, another seismic event was taking place on the financial markets as cryptocurrencies’ combined value hit $1 trillion for the first time.

Jack Purdy, an analyst at Messari, attempted to put the price in context when he tweeted:

It is worth trying to get a handle on the figures because they are jaw-dropping. According to crypto tracker CoinGecko, the market capitalisation of all cryptocurrency was $208 billion on the 7th January 2020. It has risen five fold in the last 12 months to a new high of $1.04 trillion. Its previous high was early January 2018 when it hovered around $850 billion before crashing by almost two thirds in one month.

The latest record valuation comes on the back of the soaring value of Bitcoin. In one year, the globe’s most valuable cryptocurrency has increased by just under 400% and is currently trading at around $38,000. Bitcoin’s recent rise has been staggering. It surged 11% in the last 24 hours alone and 65% in the last 14 days. With a market capitalisation of $714 billion, Bitcoin is only a couple of billion away from the valuation of Tesla and is just outside the top ten assets ranked by market capitalisation.

It is not the only cryptocurrency to have shone brightly of late. Ethereum, the second most valuable crypto, is up 62% in the last week and now sells at $1227. That price gives Ether a market capitalisation of $140 billion. Together with Bitcoin, the two digital assets are worth more than 4/5 of all cryptocurrencies’ value. Tether, XRP and LiteCoin complete the top five.

At the time of writing (15:00, 7th Jan 21), the screens are flashing green for almost every cryptocurrency as the soaring values of Bitcoin and Ether rub off on their competitors. Dozens have seen double digit rises in mere days.

Will there be a correction? We cannot tell the future. However, it certainly would not be the first correction; as many retail investors who bought in late 2017 would unhappily attest. Crypto’s reputation for volatility could not be called unfair by even its biggest fans.

All the same, if current valuations seem frothy to some, they seem hugely undervalued to others. Qiao Wang is co-founder of decentralized finance (DeFi) accelerator firm DeFi Alliance and former quantitative trader at Tower Research. In an interview with CoinDesk, he said, ‘Cryptocurrencies are now almost an institutional-grade venture bet. The market is finally liquid enough to deploy large sums of capital, but still early enough for a 10x return.’

JP Morgan Chase & Co. thought that Bitcoin’s long term value could reach $146,000. Citibank have cited $300, 000. While making several bearish counter arguments, Nick Maggiulli, chief operating officer at Ritholtz Wealth Management, recently went further still and wondered if Bitcoin could rise to $500,000 a coin. Sticking his neck out, or going for broke – choose whichever metaphor you like -Cory Klippsten, the chief executive of Bitcoin-buying app Swan Bitcoin, thinks that $1 million is feasible in the next ten years.

What is for certain is that there has been a sea change in sentiment around cryptocurrency. Against a backdrop of central banks printing money to offset the financial havoc of Covid 19, many institutional investors have come round to the idea that cryptocurrencies are a possible way of moving value beyond the reach of state policy. Companies such as PayPal, Square and Revolut have adopted crypto while the conservative insurance giant MassMutual recently purchased $100 million-worth of Bitcoin.

Put another way, crypto is losing its former renegade status and becoming respectable and trusted. In an essay for The Conversation, Iwa Salami, Senior Lecturer in Financial Law and Regulation, University of East London, eloquently noted that ‘at least as far as centralised exchanges are concerned, the days of cryptocurrencies ruled by romantic buccaneers and pirates are slowly coming to an end’.

‘Unlike Bitcoin’s previous surge in 2017, which was driven by the hype among retail investors, the latest increase is a result of institutional investors, public companies, major banks and payment companies turning their investment focus to digital assets like cryptocurrency.’

Last November, Ruffer Investment Company announced that they had taken some profits from gold and initiated a £550 million position in Bitcoin. At the time, they explained:

‘We see this as a small but potent insurance policy against the continuing devaluation of the world’s major currencies. Bitcoin diversifies the company’s (much larger) investments in gold and inflation-linked bonds, and acts as a hedge to some of the monetary and market risks that we see.

Depending on your perspective, £550 million may or may not be small but, as insurance policies go, there is no arguing with how potent it has been for Ruffer to date. Some have speculated that the fund managers have bagged paper profits of up to £690 million. Good going for an investment made around two months ago.

Another factor driving crypto gains is that the number of sellers is low at the moment and this restricted supply is increasing demand. According to trader chatter on various blogs, the only sellers around seem to be investors from East Asia who are selling to investors in the West.

This seems to be an acceleration of an earlier trend. Block chain analysis company, Chainalysis released their 2020 Geography of Cryptocurrency Report last August. Drawing on data from July 2019 to June 2020, it mooted that East Asia ‘is arguably the linchpin of the global cryptocurrency market. With 78% higher trading volume than the next closest region, it has liquidity to spare and sends more cryptocurrency around the globe than any other region’. Comparatively early adopters of crypto, East Asian investors appear to be slowly top slicing from their massive gains into the eager hands of investors further west.

While noting that in March 2020, North America overtook East Asia for the second time in the last 12 months as ‘the region where professional investors dominate most’, the report also underlined the increased interest in crypto from well established financial names:

‘North America also hosts a growing class of institutional investors moving even larger transfers of cryptocurrency than those we typically see from professional traders. The institutional share of the market has grown over the past few years, which can be seen by many to legitimize cryptocurrency as an asset class.’

The cryptocurrency story has been a wild one so far and there will certainly be other twists and turns in the tale. The $1 trillion market capitalisation will not be the final chapter but it will be a significant one in which crypto displays a maturity which many thought beyond it. As many institutional investors begin to look at crypto more fondly, we will give the final word to Ruffer, who, in their portfolio update, wryly pointed out that Bitcoin ‘seems set to move from being loved by the anti-establishment to being embraced by the dominant interests of the establishment’.