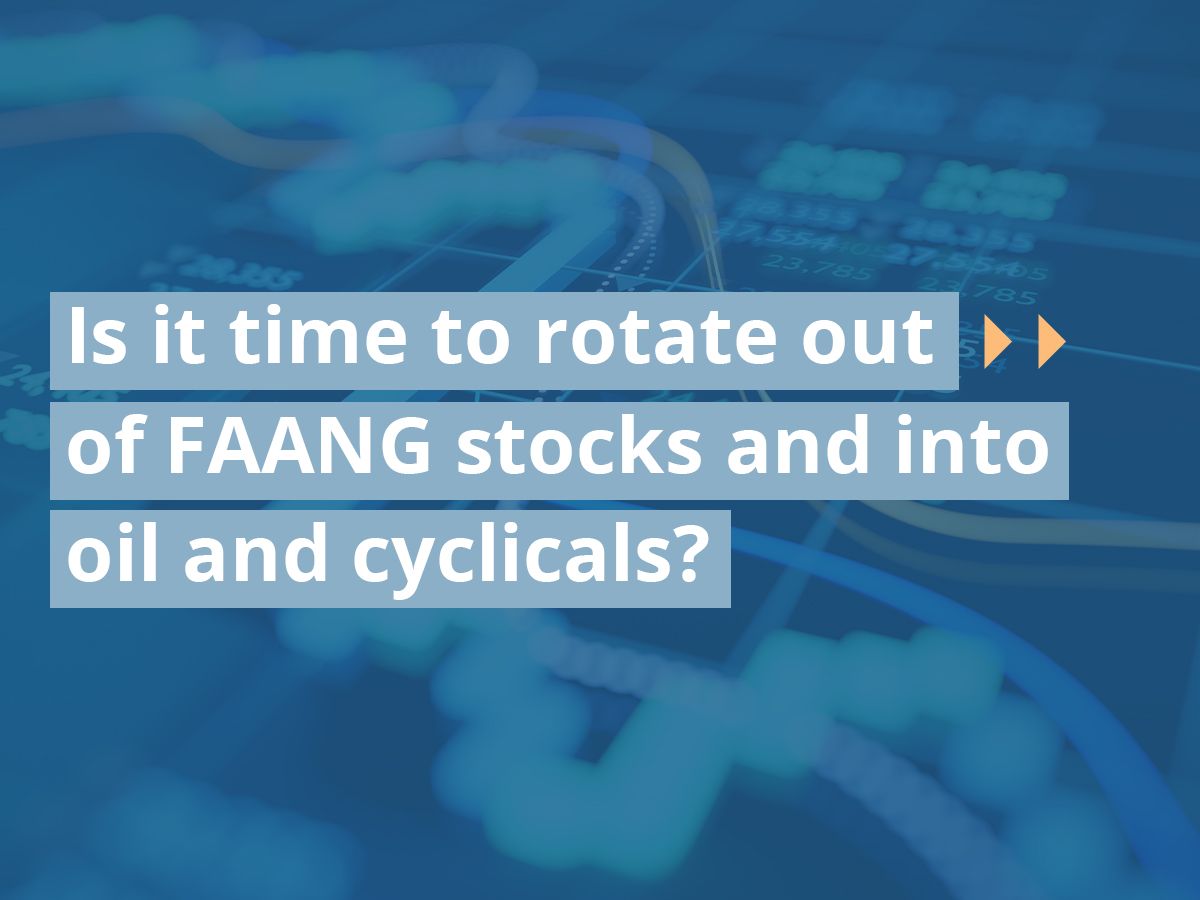 FAANG stocks include Facebook (NASDAQ:FB), Amazon (NASDAQ:AMZN), Apple (NASDAQ:AAPL), Netflix (NASDAQ:NFLX); and Alphabet (NASDAQ:GOOG). These five favourites among investors have generated endless publicity and discussion throughout 2020. The mania surrounding US tech stocks in the wake of the Covid-19 pandemic has been unprecedented and highly lucrative for those involved. Many retail investors have become rich beyond their wildest dreams by taking a punt on the tech sector and raking it in. However, in recent weeks there’s been a defined rotation away from growth and into value.

Has the tide turned on tech?

With the advancement of a useable vaccine, unloved stocks are rebounding, and the pandemic favourites are dipping. But is this just a momentary blip? Some analysts believe it’s time to get out of the tech giants and pounce on value options. Others believe there’s plenty more steam in the sector to see out several more years. The decision is entirely yours.

Jim Cramer, Mad Money TV stock pundit, is a big supporter of the tech sector. He said: ‘There are some stocks that become a lot less attractive when the world goes back to normal, but not FAANG. They don’t care who’s in the White House or how soon we get vaccinated. These are the group that led us higher this year and they are not going away, not anytime soon!’

According to Cramer, each of these five tech favourites has a unique selling point that will keep them attractive and profitable long after the pandemic is behind us.

Facebook, along with Twitter and Google, has been under fire in recent weeks. Mark Zuckerberg and his rival CEO’s have all appeared before the United States Congress to discuss Section 230 of the Communications Decency Act. But by cooperating with congress, Facebook keeps in their good graces. Facebook has its hands on so much consumer data it’s beyond human contemplation. But it’s actually done an outstanding job of transitioning in recent years from a hated superpower presumed to have evil intentions, to an advocate and angel to small businesses. Facebook’s advertising platform is first class, enabling small and medium-sized businesses to be seen.

Cramer said: ‘Advertising on Facebook and Instagram, incredible bargain for small businesses, gives the best bang for the buck!’

Facebook is also moving into cryptocurrency with its Libra coin which could be another game changer for the company. Nevertheless, Facebook may also face legal action on at least two counts, if recent reports prove true. One of these is expected to be a legal action by a coalition of states and another from the US federal government. It was recently fined $6.06 million by a South Korean agency. While this is not good for its image, the company has plenty of money and clout to defend itself.

Is Apple stock a good buy?

Apple is still King of cool tech and its Apple watch and AirPods are dominating the wearable leagues as must-buy Christmas gifts. It’s latest iPhone 12 offering is still busting sales records and Billionaire investor Warren Buffett now holds Apple as the biggest share of his Berkshire Hathaway holdings! There’s a lot to like about Apple and its quality products never seem to disappoint. There’s not much growth opportunity here, but it offers a small dividend and remains a popular long-term stock to buy and hold.

Apple has a fabulous on-line presence which is why i am not worried https://t.co/pNVjyah4bi

Are Amazon shares a good buy?

Amazon is the multinational shopping entity that never stops evolving. It seems to answer consumer desires they never knew they had. In its latest e-commerce move to shake up a dominant industry, Amazon is moving into pharmaceuticals. It’s a great space to be agitating, particularly with such emphasis on global health this year. Big pharma has long been considered a racket, taking advantage of citizens by charging extortionate prices. If Amazon can bring them down a peg or two, it will be a win-win for all involved.

But it’s also soaring on its cloud computing business, which is head and shoulders above much of its competition. Amazon still has plenty of avenues to explore for further revenue growth.

Is Netflix stock a good buy?

Streaming sensation Netflix is going from strength to strength. And its great content doesn’t appear to be slowing down, despite Covid-19 hampering productions. Jim Cramer thinks Netflix can do no wrong and remains bullish on the family favourite. His view is not shared by everyone, though. After Q3 earnings fell short of estimates, some analysts believe it’s time to exit. The pandemic brought strong new subscriber numbers, but some believe this can’t be maintained and competition is mounting.

Is Google stock a good buy?

Google cut back on its expenses this year and its advertising revenues increased, so its Q3 results were better than expected. It is another company facing ongoing legal troubles as the US Dept of Justice recently filed an antitrust lawsuit against it. It’s previously paid fines with ease, due to its large cash reserves, but there are concerns it would have to restructure if it loses against the DOJ. Nevertheless, an outcome to this is likely to take years.

Digital advertising is Google’s main source of income, but it also operates in cloud computing, artificial intelligence and consumer hardware. Its revenues from YouTube subscriptions are ramping up and this remains a core part of its business.

If buying FAANG stocks outright doesn’t appeal, you could gain access to them via an exchange-traded fund (ETF). There are several available to retail investors.

Alternatively, the SPDR NYSE Technology ETF (NYSEARCA: XNTK) is up a whopping 62% year-to-date!

Which sectors or stocks look good?

Goldman Sachs Group Inc (NYSE:GS) has recently predicted that growth stocks will go out of favour for a few months, while cyclical and value stocks take their place. It upgraded bank and auto stocks, believing these will be where investors will want to jump in, as vaccine rollouts begin.

Meanwhile, it downgraded food, drinks and tobacco stocks. If bond yields rise and economic growth improves, then investors will rush for the stocks sensitive to big shifts in sentiment. This is unlikely to be a long-lasting shift, though, as they expect underlying interest rates to remain subdued for some time.

Why not jump in and buy cheap Oil Stocks?

Oil stocks are down and out this year, with many of them having declared chapter 11 bankruptcy and many more failing to make a profit of the invariably low oil price. However, the oil price has been gaining ground in recent weeks and many people believe it will make a sharp recovery once international travel resumes.

It all hinges on supply and demand and as long as supply outstrips demand the price will stay low. Buying oil stocks could well be a money-spinner, but it might be a gradual process to get there. There’s a lot of risk in buying the smaller companies, while even the bigger ones have an uphill battle on their hands. Chevron (NYSE: CVX), Exxon (NYSE: XOM), BP (NYSE: BP) and Royal Dutch Shell (NYSE: RDS.B) have all seen their share prices crushed this year but are now enjoying a slight upturn.

Are Small-Cap Stocks a better option?

The US small-cap Russell 2000 Index (INDEXRUSSELL: RUT) is on fire, having risen 22% since November 1. And last month was its best monthly gain since it launched in 1984.

The positive sentiment fuelling this burst centres around the vaccine news and an easier transition to a Biden administration than many initially feared. The index contains around 2000 American companies following the top 1000 US companies in the Russell 3000 index, which contains the largest US stocks by market capitalization.

Cyclical sectors include financials, airlines, industrials, materials and energy. These often recover quickly after a downturn because they tend to focus on a domestic market. The Russell 2000 contains more of these cyclical stocks than the Russell 1000, which contains more of the popular FAANG type stocks.

However, not all these are going to have an easy time ahead. Banking in particular is likely to face an onslaught of defaults as more and more people find themselves out of work and businesses go bust. Meanwhile, airlines will take years to get back to their pre-pandemic profit range.

Some Russell 2000 components include InVitae Corp (NYSE: NVTA) (A favourite of Cathie Wood at ARK Invest), iRobot Corp (NASDAQ: IRBT) and Magenta Therapeutics (NASDAQ: MGTA). While two of the best performing constituents of the Russell 2000 this year include Novavax Inc (NASDAQ:NVAX) and Veritone Inc (NASDAQ:VERI).

Six Flags Entertainment Corp (SIX:NYSE), a theme park operator was obviously hammered by lockdowns but its share price is one boosted by the November rally. Oil and Gas stock TechnipFMC PLC (NYSE: FTI) is another and department store Kohl’s Corp. (NYSE: KSS) has also bounced back since November.

FAANG stocks may have gotten much bigger than anyone could have imagined in recent years, but it seems they’ll be around for many more years to come. The pivot to cyclicals and value stocks may be a quick way to cash in during the coming weeks, but with so much economic uncertainty facing the world, their recovery could be short-lived. Choosing stocks to buy should always begin with in-depth research and a clear understanding of the company you want to own a piece of.